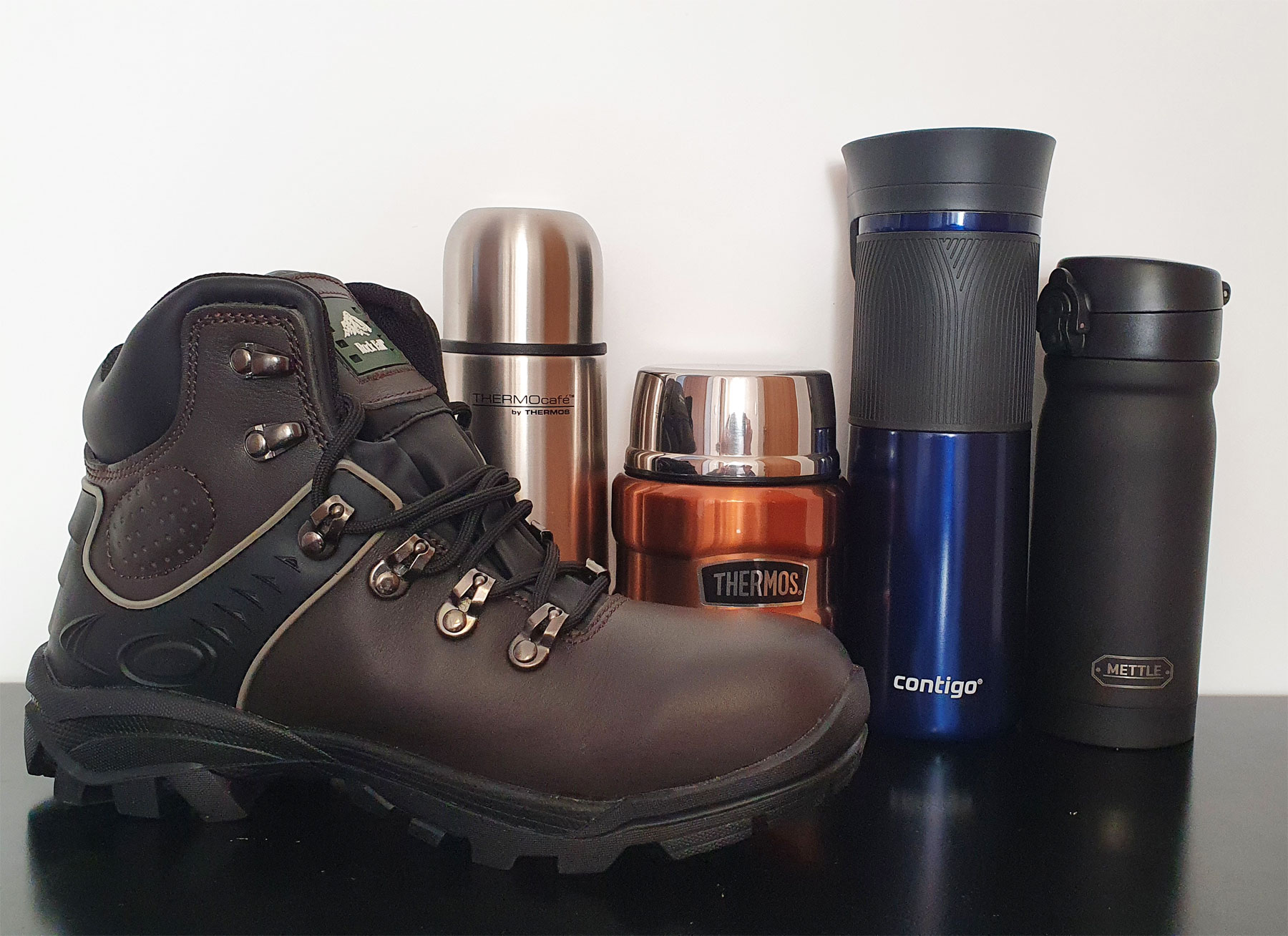 If you’ve ever walked into a store like TKMaxx, you’ll invariably come across a shelf filled with drinks containers, all claiming to keep drinks hot or cold for specific lengths of time. After buying countless types of these drinks vessels, we’ve whittled the list down to four that, based on our tests, keep drinks the hottest for the longest time.

The UK Advertising Standards Agency and marketing companies have a lot to answer for. Gone are the days when a manufacturer could only state factual, cast-iron and authenticated statements with their products.

Nowadays, there’s an endless stream of products constantly marketed to us with all manner of outlandish claims; however, you only get to the truth when you look carefully at what is said or written—words such as “up to 99.9% effective”, which basically means anywhere from 0% upwards, “Market-leading”, or, “Voted the best in a national poll” (which involved 500 out of nigh 70 million people) and all manner of other clever marketing ploys are being used.

Let’s face facts: we’ve all been duped by clever marketing at some point in our lives. Natasha and I are seeking to make things a whole lot clearer and more transparent by buying products with our own money, doing some independent tests and then revealing what we’ve discovered.

Most people with The Hiking Bug are all-weather hikers, and there are few better things to enthuse and motivate than a hot refreshing drink on a coldish day. Over the years, a hot drinks container has played an essential part in our adventures. It’s boosted us whilst on a long drive and acted as a reward when we’ve achieved our goals. But, like many, we have fallen for clever marketing and discovered what we expected was a hot drink has turned into nothing more than a tepid liquid and, in some cases, a cold one!

Over the years, we’ve accumulated an assortment of hot drinks containers. All of which is now sat at the very back of the kitchen cupboards, eagerly awaiting the day when they’ll once more touch human lips. Sadly, unless we’re in the company of a workman, it will rarely happen. 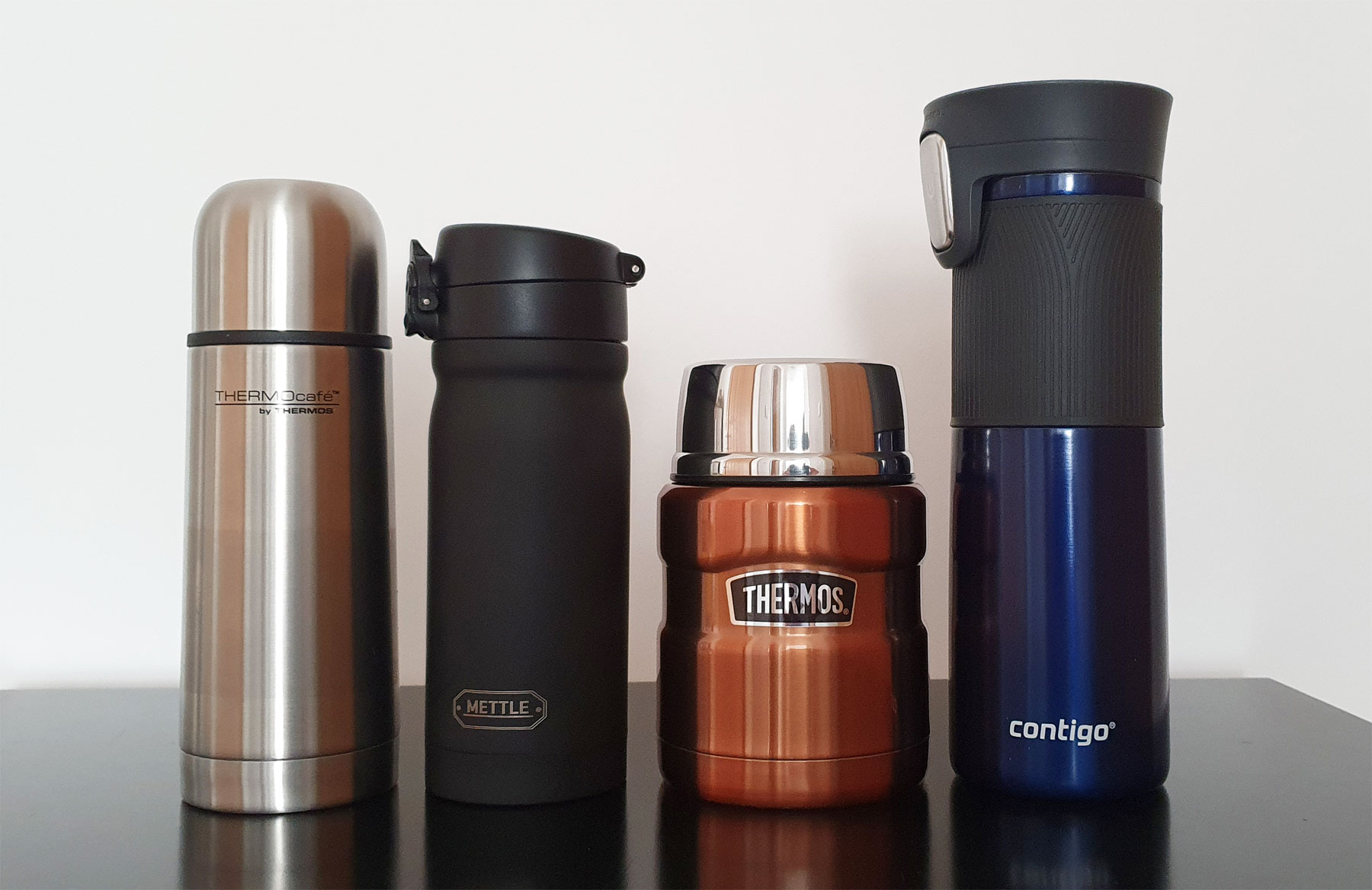 Which brands made the shortlist?
The brands that made our shortlist include some well-known names that most people would consider being shoo-ins. They are Thermos, Contigo, THERMOCafe by Thermo and the lesser-known Mettle. 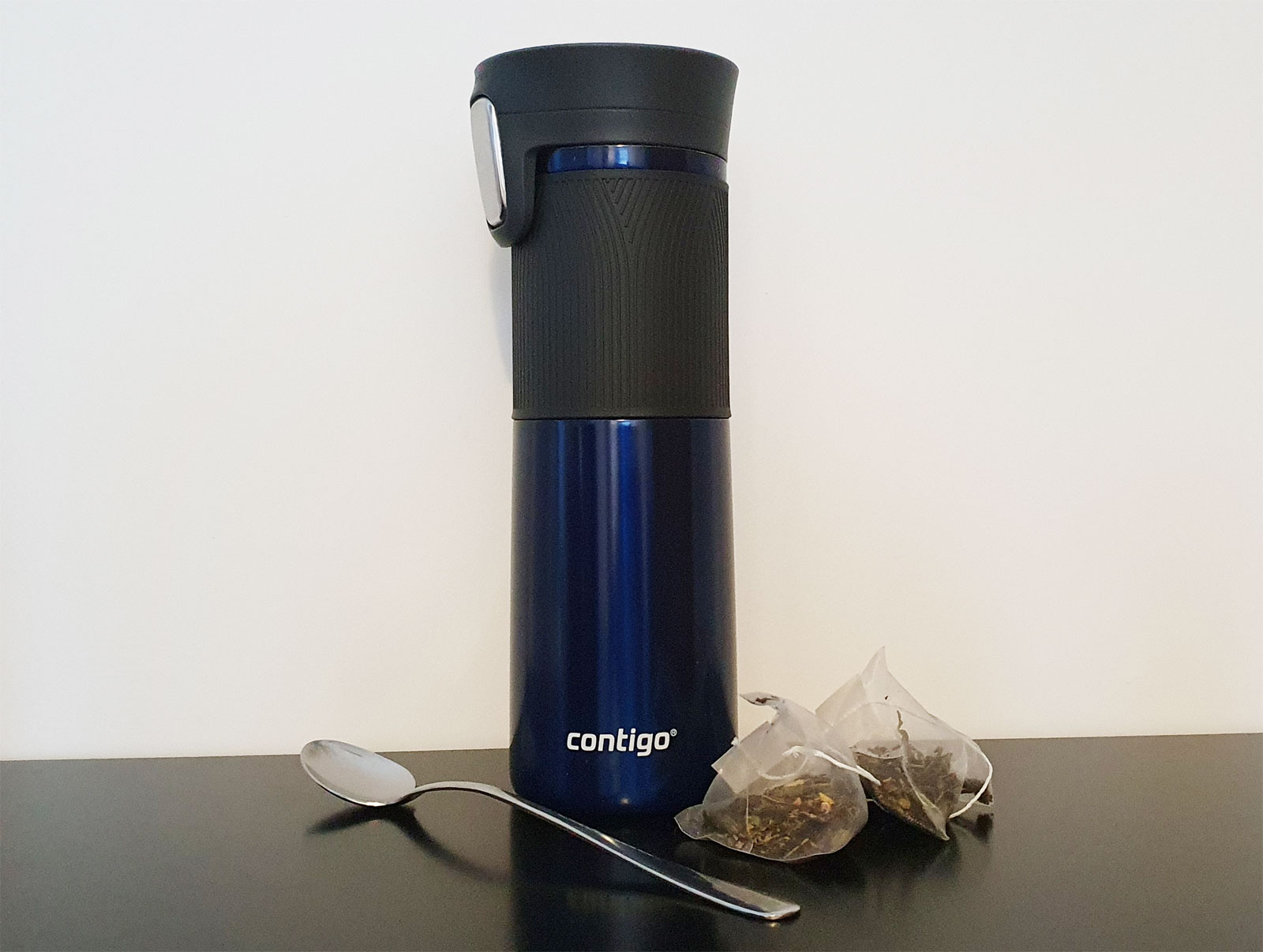 Over recent years, Contigo’s Byron has been our go-to hot drinks container. However, its use has been limited mainly to indoors as it is slightly too wide at the base to fit into the cupholder in our Citroen Car. The Byron we have is a smart-looking drinks container, leakproof, and very proficient at keeping drinks hot. After four hours, drinks still remain what we would classify as quite hot. 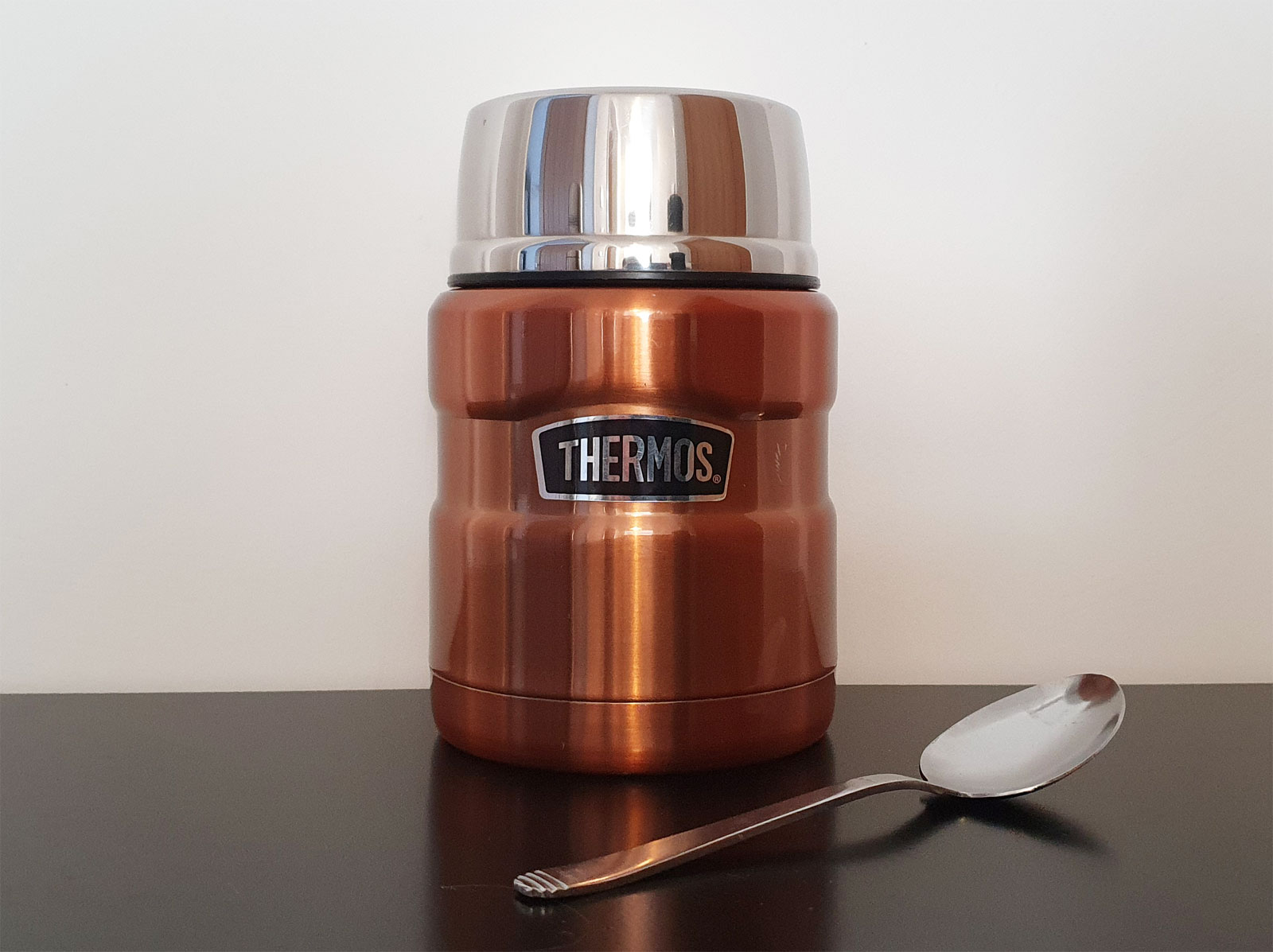 Next on the list is probably the best known of all the brand names, and that is Thermos. The Thermos container we tested is less of a thermal cup and more of a small squat flask. Its shape makes it ideal for not only liquids but all foods. As you would expect from a brand such as Thermos, the performance is excellent, and foods and drinks remain thoroughly hot throughout the whole day. 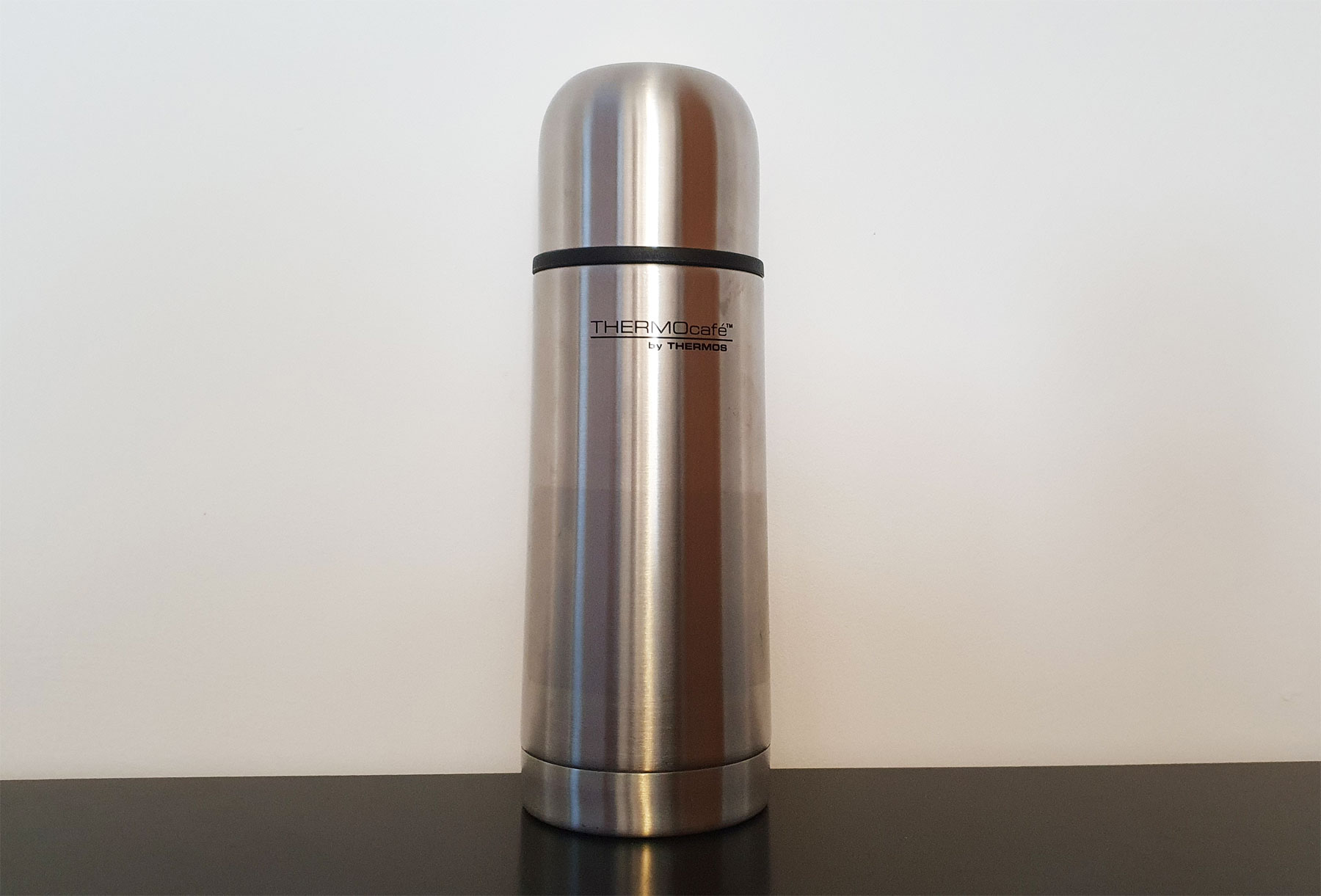 Also making the top four is the THERMOCafe stainless steel flask. THERMOCafe is an off-shoot of Thermo and adopts a very traditional flask style and form. It uses double-wall vacuum insulation with the lid acting as a cup. 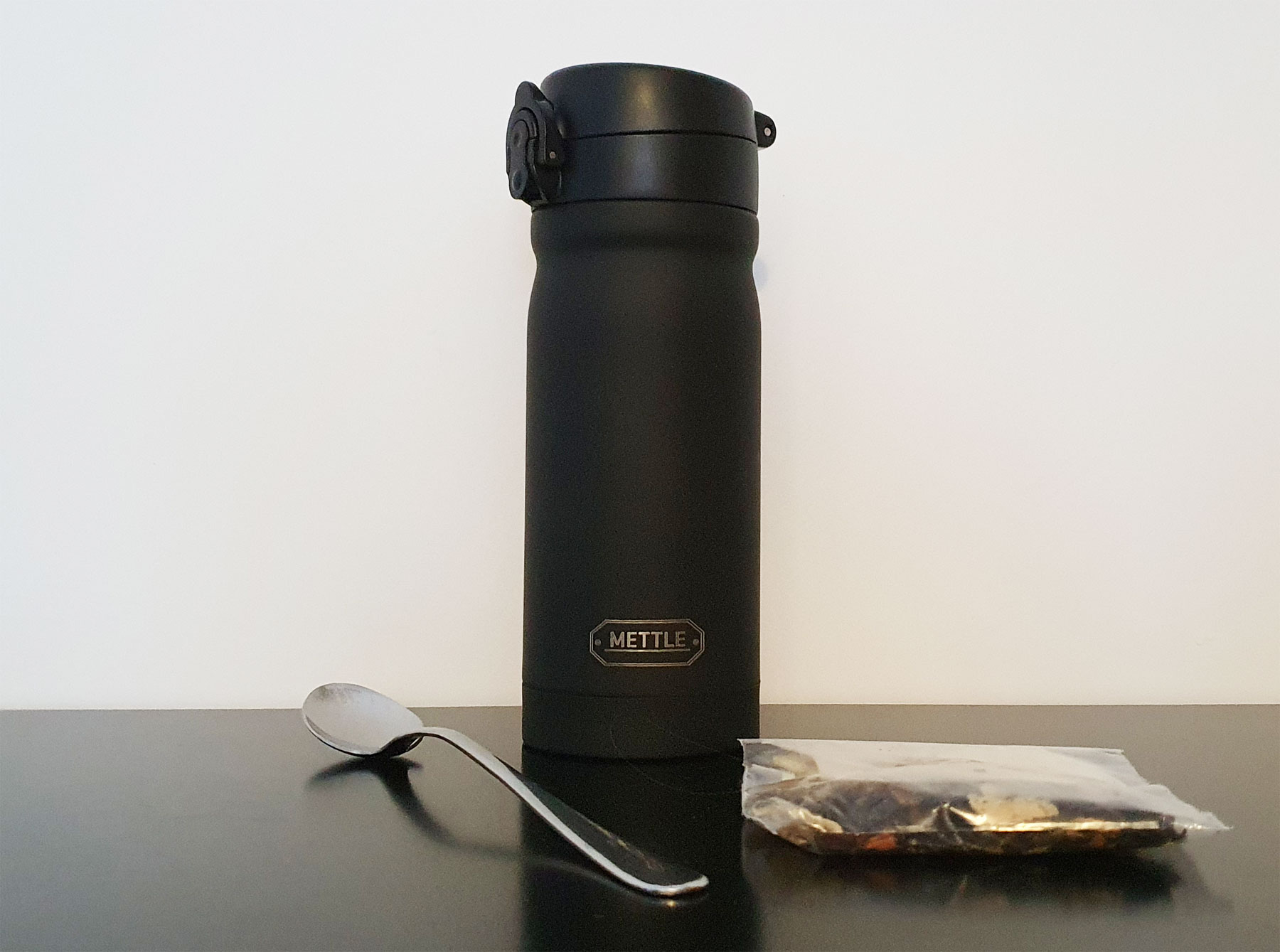 The final member of the top four is a brand we hadn’t come across previously, and that’s Mettle. Like the Contigo, the Mettle is a standard looking hot drinks container. It uses a lockable flip-up lid that opens to a mouthpiece from which you drink. The Mettle’s performance surprised us as it kept drinks hotter for longer than even the much-vaunted Contigo.

Unlike the Contigo, the Mettle fitted in our in-car drinks holder. However, it does have one major drawback. When drinking from it, the unsupported lid tends to fall forward, meaning that you need to drink from it whilst using a finger to stop the wet lid from hitting your nose! 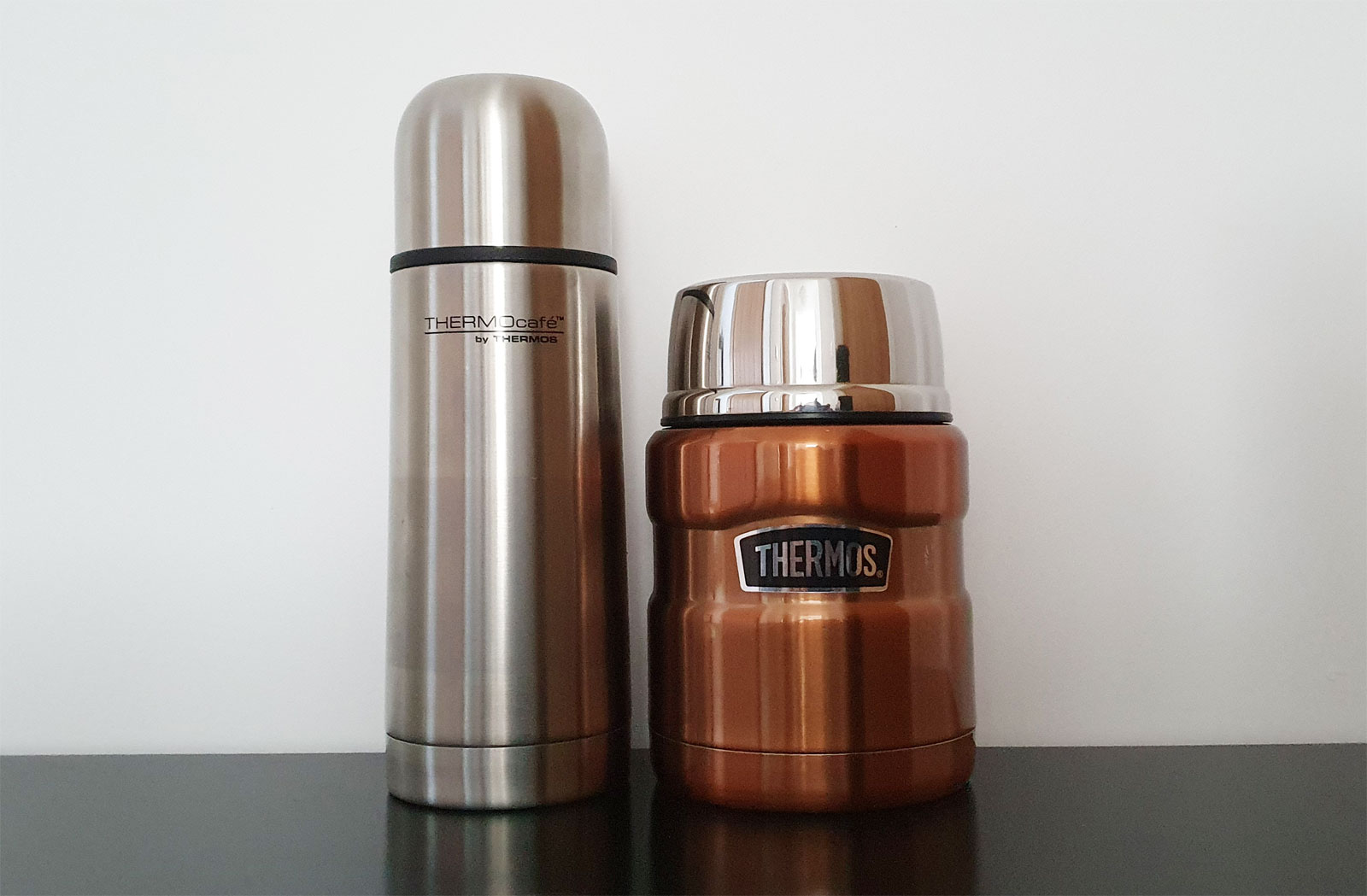 The Verdict
The Thermos containers stand head and shoulders above the others when it comes to keeping a drink hottest for longer. Propping up the list, which did take us somewhat by surprise, was the Contigo which generally kept drinks hot for around three to four hours. It should be mentioned that the Contigo we used in this test was first used six-eight months ago which might have affected the results and it is far easier to drink from than the Mettle container.

The Mettle drinks container surprised us with its performance, particularly when you take into consideration its low price point, (Less than £10 from TKMaxx). It was able to keep the drink hot for around five hours.

However, the clear winner in our test was the THERMOCafe stainless steel flask.

When it came to keeping drinks hot for the longest, its performance was only just shy of its better known Thermo sibling, whose shape and practicality relegates it to second place in our list. Both of the Thermo products we able to keep drinks hot for in excess of six hours.

The shape and size of the THERMOCafe make it easy to tuck away in a rucksack, and the clever screw-top design means there is never a need to worry about leakage. Plus, the fact that it only costs around £10 from retailers such as Argos and you can use the lid as a cup made it the clear winner.

During the past few months, the THERMOCafe stainless steel flask has accompanied us in climbing nigh on 50,000 feet of hills and mountains and around 750,000 hiking steps. Each time, it has never failed in amazing us, treating us to a hot drink that feels like it has only just been, and this is after many hours inside a rucksack in all types of weather. Unless a manufacturer can introduce us to something better, based on our test, the THERMOCafe stainless steel flask is the vessel you need to take with you on a hike if you’re after a hot rewarding drink along the way.